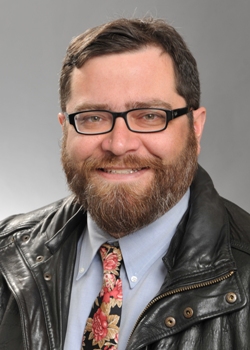 Sam Gallant is not only the namesake of popular bagel chain Sam’s Bagels, he is the Culture and Arts Reporter and Producer for WTMD.  He covers everything from openings to closings and the life that happens in between.

Sam has recently completed work on the Baltimore Icons series, chronicling the people, places and things that define Baltimore.

Sam also files reports for National Public Radio, including his first radio career working as a reporter for KSKA in Anchorage, Alaska and producing the NPR syndicated Kojo Nnamdi Show for WAMU in Washington, DC.  Sam has won numerous awards for his production work at WAMU as well as his reporting for KSKA. Rounding out his radio experience, Sam worked for WYPR for ten years as an announcer.

Aside from radio work, he has worked for the national non-profit LISC (Local Initiatives Support Corporation) in Washington and has served on numerous non-profit boards in Baltimore, including the Creative Alliance.  Sam has also emceed and served as auctioneer for many events and organizations and is a true performer; his favorite job ever was giving ghost tours in Baltimore historical haunted hot spot, Fells Point.

Loving the spotlight, he has acted in a number of local plays and films and can still be seen performing moonlighting on weekly television: playing with balls for the Maryland State Lottery as a drawing official on WBAL and MPT.

Sam is a Virgo and enjoys quiet evenings by the fireplace with a cat, a glass of wine and a good book (or, more likely, Netflix since books put him to  sleep).  When not relaxing comfortably at home or working, Sam likes to adventure out into the world.  He is an experienced traveler and knows how to have fun, typically joined by daughter Maya and wife Alethea.

Tune in today and hear all of the fun stories Sam files for WTMD.