“Do Whatever You Want, All the Time: The Baltimore Music Scene 2005-2020” is a new short documentary produced by WTMD which debuts in 2022. Title card illustration by Alex Fine.

WTMD and the Creative Alliance are excited to present Baltimore Music on Film, an evening of short films which explore pioneering area musicians, from Beach House, Dan Deacon and DDm to trailblazing bluegrass musician Hazel Dickens.

This collection of three short films chronicles various corners of Maryland’s rich music scene. It’s also the Baltimore debut of “Don’t Put Her Down,” a new work by award-winning Baltimore filmmaker Julia Golonka. Plus: A sneak preview of the forthcoming Baltimore House Music documentary “Music Liberated: Baltimore’s in the House.”

Join WTMD’s Sam Sessa and directors Golonka, Joe Tropea, in a Q+A with Dan Deacon, Lydia Woolever and Abdu Ali after the screening.

Free, but RSVPs are required.

“Do Whatever You Want, All the Time: The Baltimore Music Scene 2005-2020”
Runtime: 24 minutes
From 2005 to 2020, Baltimore’s music scene went from near obscurity to being named Best Music Scene in the nation by Rolling Stone magazine. But the breadth and depth of the scene has never before been documented in one place. This new short documentary, produced by WTMD, gathers the diverse strands of Baltimore’s music community and presents them with a fresh perspective. 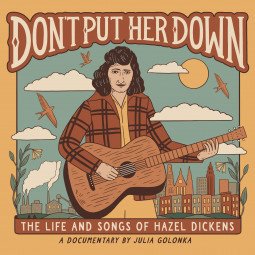 “Don’t Put Her Down”
Runtime: 30 minutes
This film takes its title from Hazel Dickens’ powerful anthem “Don’t Put Her Down, You Helped Put Her There,” and explores how she, along with her musical partner Alice Gerard, became the first women to front a bluegrass band and reflects on the role of women in bluegrass today. The film covers Hazel’s migration to Baltimore from coal country West Virginia, her activism for coal miners and working people, and the impact her upbringing had on her songwriting. Lifelong collaborators and up-and-coming musicians share what it means to have bluegrass songs written from a woman’s point of view and keep Hazel’s memory alive.

“Fugazi’s Barber” by Joe Tropea
Runtime: 16 minutes
When 1980s hardcore kids frequent an old school Italian barber shop in their Washington D.C. neighborhood, legends and bonds that will last a lifetime are formed. A short documentary by Joe Tropea & Robert A. Emmons Jr.

“Music Liberated: Baltimore’s in the House” is the story of how a group of overlooked people in a cast-aside city used grit to forge a unique sound that changed the nation and the world. Undeterred by a city deteriorating around them and the political opposition they faced, Baltimore DJs, producers, and music artists helped spread house music to heal the nation and the world.
Extended Preview

Sam Sessa is Director of Events and Community Engagement for WYPR and WTMD. From 2006 to 2022 he hosted Baltimore Hit Parade on WTMD, and was a reporter and editor with the Baltimore Sun from 2005 to 2013.

Julia Golonka is an editor and cinematographer with a degree in film from the Maryland Institute College of Art. She has worked on documentaries covering a diverse range of topics, including fine artists, prisoner reentry, and Anatomy of Wings, a film 12 years in the making about an after-school program that became a family. She was a 2019 Saul Zaentz Innovation Fund Fellow for her documentary Don’t Put Her Down, and currently works as a Senior Editor and Producer at a Baltimore-based production company.

Joe Tropea is a filmmaker from Baltimore and a curator at the Maryland Center for History and Culture. He is the co-director of the award-winning 2013 documentary, Hit & Stay, and the director of 2018’s Sickies Making Films.

Robert A. Emmons Jr. is the Associate Director of the Digital Studies Center and an Assistant Teaching Professor in the Fine Arts Department at Rutgers University-Camden. His 2014 film, Diagram for Delinquents, is about Fredric Wertham and the comic book panic of the 1940’s and ‘50s. It has played at various comic book conventions including Wizard World Chicago and the San Diego Comic Con. His previous films include the award winning Goodwill: The Flight of Emilio Carranza (2007), and De Luxe: The Tale of Blue Comet (2010).

Runtimes and films are subject to change.