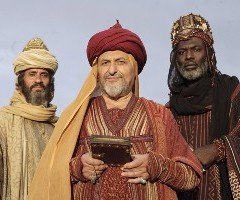 The King is the original singer here, sort of, as the melody for this song is actually based on a 300 year old French love song composed by Jean-Paul-Égide Martini.