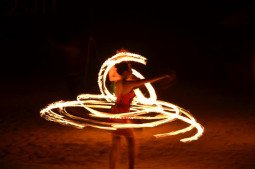 The original band recorded this so late, in the wee hours of their studio session, that most of the members were already asleep and the producer, Phil Spector ended up playing bass while a janitor in the building sang back-up.

The Shadow artist is from Shreveport, Louisiana who has released four albums since 2010.

The song was featured in the 2007 film Darjeeling Limited and is one of the rare instances in film when a song is used in its entirety.