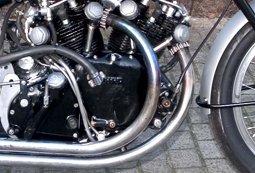 The original artist was a founding member of a groundbreaking British folk-rock group in the late 1960s. He left after several years for a solo career, part of the time as a duo with his then-wife.

The shadow country rock band is led by two brothers from Idaho who relocated to Austin Texas in 1996. Due to the band’s name they shouldn’t use the device in the title of the song.

(Photo by private, with permission of the author – Private collection, CC BY-SA 3.0, https://commons.wikimedia.org/w/index.php?curid=1057532)