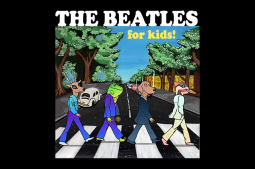 Update: this show is now sold out, but you can still listen live on air starting at 10 a.m. Saturday!

The Beatles are the ultimate kids rock band – the one that kids, parents and grandparents can all enjoy together.

And the only kind of music that might be more universal than the Beatles is reggae.

Join us Aug. 7 for a special Saturday Morning Tunes show featuring the Baltimore reggae Beatles tribute band Yellow Dubmarine, who bring together the music of the Beatles with reggae vibes.

Beatles AND reggae in one show? Yes, and it’s at Monument City Brewing, a Baltimore brewery with plenty of free parking and cold, delicious drinks.

This is an outdoor show, held in the open patio and parking lot just behind Monument City Brewing in Baltimore. The brewery will be running drink specials just for us, and we’ll have bicycle rides from our presenting sponsor, Race Pace Bicycles.

If you’ve never been to Monument City Brewing, 1 N. Haven St. in Baltimore, it’s part of a large, nice-looking gated business community which also includes Urban Axes, Beacon Threads, B-Fit Lifestyle, the Boiler Room and others. The parking lot is huge and the stage will be set up right outside of Monument’s front door.

The last time we did this show was at the Carver Center for Arts and Technology’s theater in Towson, and we had 800 parents and kids in the audience. We’re looking forward to seeing you and your family in person!

Concerts are every month on Saturday mornings, broadcast live on the radio with a live studio audience. We’ve had members of They Might Be Giants, Barry Louis Polisar (who wrote the theme song to “Juno”), Latin Grammy winner 1,2,3, Andres, Baltimore kids rock stars Milkshake and Baby Beats, and more. We’ve had sold-out Grateful Dead and Beatles shows, and our Phish tribute for kids was our biggest ever — more than 1,100 parents and kids at Power Plant Live in June 2019!

Thank you Baltimore Magazine for naming Saturday Morning Tunes a Best of Baltimore award winner! They wrote, “Kids can rejoice at this awesome new concert series, tailored just for them. Tip back a juice box and get ready to rock out.”

Also — kids under 2 are free! However, please reserve a free spot for your kid(s) under 2 so we know how many little ones to expect. Family Four Packs can be used with any combination of adults and children.

Artwork by the Baltimore artist and children’s book author Kevin Sherry. The new book in his “Squidding Around” series just came out.