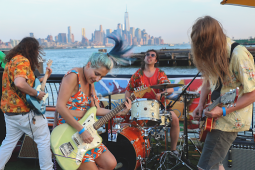 When asked why he chose this song to cover, The Shadow artist replied, “Number one, Chicago band keep it local, local business and it’s just a great song about nostalgia and summertime. I heard it when I was 16 years old. It’s on such a serious album and then it gets like so fun at the drop of a hat. It was a brilliant move on [the original band’s] part.

The Shadow was recorded on a Ferris wheel at Chicago’s Navy Pier.

The Shadow artist provided the soundtrack for a Netflix series.