Bluegrass and pop music may seem worlds apart, but they sound so good together! 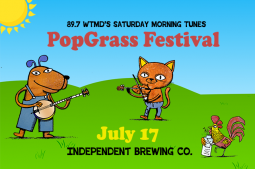 Presented by Race Pace Bicycles, it’s our first family concert at Independent Brewing Company, at 418 N. Main St. in Bel Air. The stage will be set up under a huge outdoor tent (with no side flaps). Masks are not required. The brewery also has a green space and multiple indoor and outdoor lounging areas. Plus, their beers are brewed to be gluten free!

Both bands will play a mix of half original bluegrass songs and half pop covers. Which pop songs? That’s a surprise — for now.

Doors open at 9:30 a.m. and the music starts at 10 a.m. and runs for about 90 minutes, so you can catch some quality live music with your family, grab a few morning brews and still be home in time for (family) naptime.

The Saturday Morning Tunes PopGrass Festival is made possible in part by Lumina Solar.

Independent features 26 rotating taps of small batch artisanal ales and cider, many are brewed with locally grown ingredients from Harford County and brewed to be gluten free. We have a daily rotating calendar of local food trucks on premises offering a variety of fresh, seasonal, and local cuisine. We fill growlers and 32 oz. cans on site, and offer a variety of six-packs to go. IBCo offers an array of bottled craft sodas with cane sugar, organic juices, and other non-alcoholic beverages as well – including Nitro Cold Brew Coffee, Homemade Root Beer, and Kombucha on Tap.

Caleb Stine is a longtime friend of WTMD, and a staple in Baltimore’s music scene. The Baltimore Sun has called him the “lynchpin of the Baltimore folk scene.” Stine keeps the music honest: hardworking, genuine, and unafriad to tell it like it is. To date, Stine has released more than 10 albums, scored music for films and acted Off-Broadway. Catch a live show and you’ll leave happier. This show features Caleb’s bluegrass lineup.

Wicked Sycamore is an all-female trio hailing from the Baltimore/DC area, consisting of Juliette Bell on guitar, Lainie Gray on mandolin, and Madeline Waters on cello. Their sound can be described as contemporary folk with a mischievous edge that is grounded in traditional roots, Americana, and bluegrass. They write original music ranging from fun and light-hearted sing-alongs to deep, introspective tunes for the ages. No matter the genre, their music relies heavily on thoughtful arrangement, instrumental prowess, and intricate vocal harmonies. By growing their presence as a collaborative force, they hope to increase female representation as both musicians and songwriters throughout the modern music landscape.

Since Saturday Morning Tunes launched in January 2017, more than 8,000 different parents and kids from all across Maryland, DC and beyond have come to one of our concerts for the whole family. We had 1,200 parents and kids at our Phish show alone!

**Family Four Packs are good for any combination of four people. Also, even though it’s free for them, please be sure to reserve a spot for your under 2-year-old. so we have an accurate head count.**

Tickets are a donation to WTMD, a 501(c)(3) non-profit, and are non-refundable. Proceeds from this concert help support family programming on-air and in our community.