Homegrown Headliner is a new weekly feature spotlighting some of the many talented performers from right here in Baltimore and across the state. It airs Wednesday nights on Evenings With Kelly Bell. 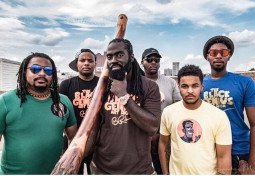 Blackroot Underground is this week’s Homegrown Headliner on Evenings With Kelly Bell.

A phenomenal group of musicians that feature everything from keys – to beatboxing – to horns – to the didgeridoo!

“Black Root Underground is a hip-hop and funk based band from Baltimore, MD with the goal of reviving the inclusiveness of participation-based performances. Comprised of multi-genre rooted musicians (see what we did there?), the band was formed in 2014. Since that time, the band has taken their crowd engaging high-energy experience up and down the Mid-Atlantic region.”

Listen to the segment —