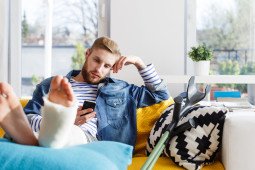 The original recording artist did not write the song. The song was written by one of, if not the most, famous song writer of the 20th century. It was written during his self-imposed exile from the public. We’re looking for the name of the band who originally released the song in 1968. It is not the most famous cover this act did of one of this songwriters songs.

The Shadow artist is a 6 foot 5 inch, red-head from the San Francisco Bay area.

The song was written after the songwriter was laid up, and mostly incapacitated, after a terrible motor cycle accident.