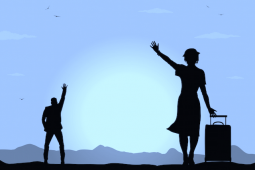 The Shadow artist did not find commercial success until he was in his 50’s. He once worked as a James Brown impersonator.

The front man of the original band left school at 15 and held such odd jobs as working in a slaughterhouse, as a car factory horn tuner, and spent 6 weeks in prison for burglary but that is not nearly as shocking as some of the crazy stunts he would become known for during the bands live performances.

The song was originally released in the early 70’s but the lead singer of the original band did later cover it as a duet with one of his daughters. Coincidentally The Shadow artist said this song always made him emotional because it made him think of his mother.