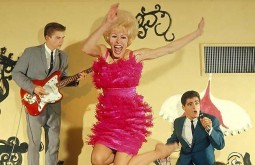 It’s a week of ghosts, goblins and ghoulish tunes on The 5 O’clock Shadow all leading to a spooktacular hours’ worth of Halloween themed songs for this Friday’s Feature Presentation.

The original band were actually three producers from New York – Bob Feldman, Jerry Goldstein and Richard Gottehrer – who wrote this song together and made up a story about the band. They claimed to be from Australia, and said they were shepherds who got rich by crossbreeding sheep.

The Shadow artist name is the same as the sound some dogs make.

The song is not about Snickers, Reese’s, M&M’s, Twizzlers, or Hershey’s but the lyrics might make you think about them.