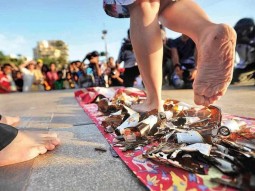 The original artist was in a popular 80’s band with Dave Stewart.

The Shadow artist are named after a street in Boston with many dive bars.