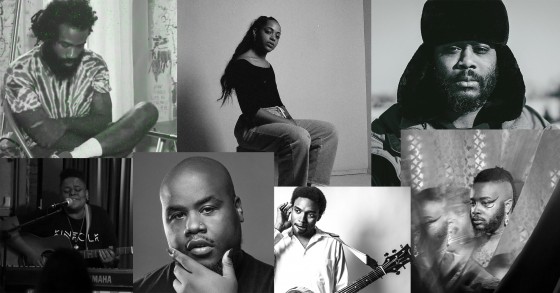 These are just a few of the incredibly talented black musicians living in and around Baltimore. Help support them by buying their music!

Since touring is still off limits for musicians, their main source of income is when people buy their music.

We’ve put together a list of black Baltimore musicians with links where you can support them by listening to and purchasing their albums and songs. Buy their music!

These are artists whose music has been played on WTMD, and who have been in studio for live shows or interviews. This is not an all-encompassing list, but it’s a starting point:

Eze Jackson
One of Baltimore’s most talented rappers and musicians, Eze plays in Soul Cannon and has a remarkable solo career. His song “Be Great” was played multiple times during a recent protest outside Baltimore’s City Hall.

Dapper Dan Midas (DDm)
He came up through Baltimore’s battle rap scene and helped lead the city’s movement to accepting openly gay rappers. His new album, “The Ballad of Omar” just came out.

Rufus Roundtree & Da Bmore Brass Factory
Rufus and his crew know how to light up a room with their deep, Parliament-style funk, and they also channel New Orleans jazz and can get a whole room moving in minutes.

Joy Postell
A talented singer and all-around-artist, Joy Postell’s album “Diaspora” was critically acclaimed and her latest work, “Back and Forth” has a throwback pop/R&B vibe.

Kentavius Jones
If you’re into Leon Bridges, you’ll love this singer and songwriter from the Eastern Shore. We’ve been playing his songs “Rogue Train” and “Luckiest Man”

Abdu Ali
Through his Kahlon dance party series and as a rep for Baltimore’s music scene, Abdu has introduced so many people to the music of LGBTQ artists. His own music continues to break new ground, as on his latest album “FIYAH!!!”

Shodekeh
As a breath artist and vocal percussionist, Shodekeh is in a class all his own. His EMBODY concerts (which we’ve hosted annually the past few years) are a celebration of the human voice like nothing else.

Jamaal “Blackroot” Collier
This versatile singer, songwriter and rapper’s latest adult album, “Root Canal” is super funky, but he might be best known for his children’s music — he’s also one half of the hip-hop and beatboxing duo Baby Beats.

J. Pope & The HearNow
Led by singer and rapper Jasmine Pope, this band puts on some serious live shows, and they’ve captured that energy in their album “Soul Searching.”

Blaqstarr
He was a teenager when the budding pop star MIA came to Baltimore to work with him and a few others on her breakout album “Kala,” channeling the heat and energy of the Baltimore Club scene for a national audience. After spending some time on the west coast, Blaqstarr is back in Baltimore and continues to release experimental, genre-bending hip-hop and dance music

Rod Lee
One of the stars of the Baltimore Club scene, Rod Lee’s song “Dance My Pain Away” hits you like a ton of bricks. He hasn’t released much new music the past few years, but his albums are required listening to anyone getting into Baltimore Club.

:3LON
Born Elon Battle, this singer is known for his smooth, emotive voice has been called “the voice of an angel” by Baltimore Magazine — and for good reason.

Lafayette Gilchrist
We have a ton of respect for this jazz pianist. He could have gone to NYC and become a huge jazz star, but he stayed in Baltimore to play by his own rules, and this city is the better for it. There’s so much great and relevant music to dig into, but his album “Blues For Freddie Gray” is a great starting point.

TT the Artist
There’s a reason she’s not “TT the Rapper” or “TT the Musician.” Tedra Wilson has always thought of the whole picture: fashion, dance, visual art, film and more. She’s contributed music to TV shows, and continues to be on the cutting edge of dance and hip-hop.

Queen Earth
A social justice-minded musician with accessible songs, especially her latest album, “Queer Core: Songs For Isolation” — it’s especially good listening when you’ve got time at home, like so many of us do right now.

Brooks Long
This man has an old soul, and you can hear it in his music. If you haven’t already, definitely listen to “Mannish Boys”

Infinity Knives
Lots of great entry points for the music of Infinity Knives — instrumentals, socially aware songs, and much more. Definitely worth a deep dive.

Landis Expandis
You may know him as the lead singer of the All Mighty Senators, but Landis is also a painter. Since quarantine started, he’s been churning out culturally relevant singles with sweet music videos on his Facebook page, and also hosting regular painting tutorials.