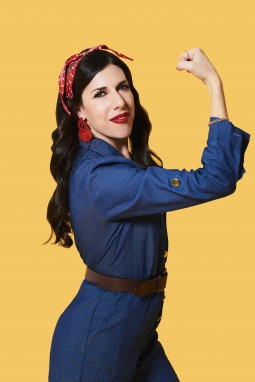 When Saturday Morning Tunes officially launched more than three years ago, our first guest was the NYC-based singer/songwriter Joanie Leeds.

Now, we’re excited to welcome Joanie back for our next Saturday Morning Tunes Livestream at 10 a.m. April 25 on WTMD’s Facebook page.

“All the Ladies” was released the same year as the 100th anniversary of the ratification of 19th amendment, which granted women the right to vote. The inspiration for Joanie’s 9th children’s album came from her life as an outspoken artist and as a single mother raising a daughter.

NYC- based singer-songwriter Joanie Leeds won first place in the USA Songwriting Competition, an Independent Music Award, a Gold Parents’ Choice Award, NAPPA Gold Award, Family Choice Award and she is a John Lennon Songwriting Award Finalist and an International Songwriting Competition Finalist.
For the past decade, she has performed songs from her 8 high-energy and interactive albums in dozens of cities across the country at venues and festivals such as Lollapalooza, Clearwater Festival, The Kennedy Center, Lincoln Center, The Smithsonian, CMAs, Hang Out Festival and the Skirball Center in LA. Her music has climbed up the charts to #1 on Sirius-XM’s Kids Place Live and has been raved about in People Magazine, Parents Magazine, Parade Magazine, New York Times, Washington Post and Billboard.
Sponsored in part by Garrison Forest School, Race Pace Bicycles, The Music Space and (cool) progeny.
By Sam Sessa|2020-04-29T09:51:44-04:00April 22nd, 2020|Categories: WTMD News|