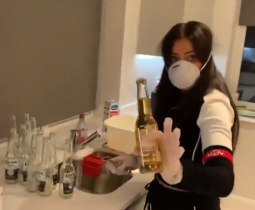 The song title derives it name from the Mexican beer of the same name, not the current virus fueling the current pandemic.

The original band’s front man was born on April 1. Sadly he is a member of the ill-fated 27 Club.

The Shadow artist are named after a small town in California.

An instrumental version of this song was used as the theme tune for both the Jackass television series and film franchise.