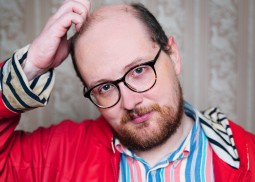 WTMD is excited to welcome Dan Deacon as our next Artist in Residence. His new album, “Mystic Familiar,” is out now on Domino Records. (Photo by Frank Hamilton.)

In the past 20 years, Baltimore’s music scene has become one of the best in the nation — and much of the credit for this renaissance belongs to the electronic musician and composer Dan Deacon.

Dan just released his latest album, “Mystic Familiar,” on Domino Records and we’re excited to welcome him as our next Artist in Residence at WTMD. He will be curating two hour-long DJ sets, which air at 7 p.m. on Thursdays Feb. 6 and Feb. 13.

He will also sit down with WTMD’s Sam Sessa for an in-depth interview on Baltimore Hit Parade at 9 p.m. on Tuesday Feb. 11.

You can listen live at 89.7-FM or stream it live at wtmd.org or via the free WTMD smartphone app.

Dan moved to Baltimore in 2004 with a group of like-minded artists who formed the experimental collective Wham City, which included Ed Schrader (of Ed Schrader’s Music Beat), and Wham City Comedy/AB Video Solutions. A tireless champion of this city and its arts scene, Dan convinced his friends Future Islands to leave North Carolina and relocate to Baltimore, where they became one of the hottest bands in indie music.

Over the years, Dan has consistently released challenging, innovative music, often combining electronic and acoustic instruments. He has produced or been part of some of the landmark Baltimore shows of the past several years, from his recent Pulse performance with the Baltimore Symphony Orchestra at a nearly sold out Meyerhoff Symphony Hall to 2015’s  sold out Windjammer festival at Pier Six Pavilion alongside Beach House and Future Islands.

Dan has spent the last several years scoring a number of movies, including “Rat Film” an “Time Trial.” His new album, “Mystic Familiar,” reveals Dan’s singing voice at its most raw and vulnerable, and displays some of his best instrumentation to date.