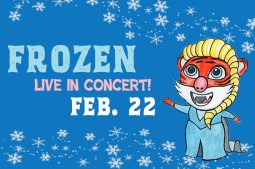 Do your kids like “Frozen?” Of course they do.

And if you’re also sick of hearing the soundtrack on endless repeat in the car and at home, bring your family to see the classically trained chamber pop group Outcalls take on the “Frozen” soundtrack live in concert on Feb. 22.

Kids think it’s awesome, and adults find it surprisingly hilarious. It’s a win-win. And after the show, your little ones can meet princesses Anna and Elsa in person.

This show has sold out multiple performances in Baltimore, and features songs from the original “Frozen,” with some of “Frozen II” as well — but no spoilers. It takes place in the Miracle Theater, a cute historic movie theater in Capitol Hill which was recently renovated.

**Family Four Packs are good for any combination of four people. Also, even though it’s free for them, please be sure to reserve a spot for your under 2-year-old. so we have an accurate head count.**

Tickets are a donation to WTMD, a 501(c)(3) non-profit, and are non-refundable. Proceeds from this concert help support children’s programming on-air and in our community.

The vocal pop duo Outcalls has been dubbed the “electronic opera queens” of Baltimore. Led by Britt Olsen-Ecker and Melissa Wimbish, both classically-trained musicians, Outcalls creates genre-defying pop music that counters the tired narratives pervading much of today’s popular songs. With compelling live shows that feature melodic and harmonic surprises, their voices can tickle your ear hairs one second and shake your teeth the next. The duo’s latest single “Keep Falling Over” was voted the #1 Song of 2018 by 89.7 WTMD radio listeners in Baltimore.

“With their glittering get-ups, engaging social media presence, and ambitious attitude, Peabody grads Britt Olsen-Ecker and Melissa Wimbish have catapulted themselves onto the local arts scene and created their very own genre along the way.” – Baltimore Magazine

The Miracle Theatre is located on Capitol Hill in the historic Barracks Row neighborhood. The original building, the Meader Theater, opened on December 27, 1909 as a vaudeville theatre with a mix of entertainment, including motion pictures and live performances. The building continued to operate as a movie theatre under several names until 1960: Meader, New Meader, Family and Academy. During the theatre’s many transitions and renovations it showed a variety of films including silent, triple-feature westerns and in the late 1950s, foreign films.

On March 23, 2011, National Community Church purchased it and embarked on a mission to revive the building’s rich history as a movie house and live entertainment destination. Today, the Miracle Theatre is a second-run movie theater and live performance venue, and the oldest movie theater in Washington, DC.