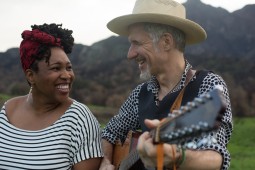 ***UPDATE: Following the recent announcement and guidance by Towson University, WTMD’s Saturday Morning Tunes show featuring Dan + Claudia Zanes on March 14 will be postponed. We’re working on rescheduling it for a later date. It’s our shared desire to protect the public health and safety of the Baltimore community and families from the spread of COVID-19. We thank you for your understanding.***

We’re excited to welcome the Grammy-winning musician Dan Zanes and his wife, Claudia, for their first Saturday Morning Tunes show on March 14!

Dan and Claudia Zanes recently moved to Baltimore, and are some of the best kindie performers out there. Dan’s first album for children and adults, “Rocket Ship Beach,” came out in 2000, and was an immediate hit. His albums have featured guest performances from Sheryl Crow, Suzanne Vega, Lou Reed, Aimee Mann, Dar Williams and others.

In 2007, Zanes received the Grammy Award for Best Musical Album for Children for Catch That Train! (2006) and produced a children’s reggae CD with Father Goose called “Its a Bam Bam Diddly”, which also features Sister Carol and Sheryl Crow.

Dan and Claudia go live at 10 a.m. at WTMD’s peformance studio, 1 Olympic Place in Towson. Admission includes coffee (for the adults) from Garrison Forest School, bicycle rides (for the kids) from Race Pace Bicycles, an instrument petting zoo from The Music Space and organic snacks.