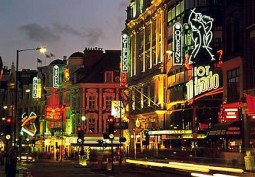 The Shadow artist are from Louisville, Kentucky. Having had some of the most memorable performances at the long running Bonnaroo music festival they are affectionately referred to as the Bonnaroo house band.

The original band, contrary to their name, have nothing to do with the trade of puppies, kittens or animals of any kind. According to The Guinness Book of Records they are the most successful duo in UK music history.

The song is about an affluent, cosmopolitan district in London in the late 80’s.