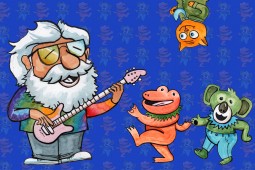 WTMD’s Saturday Morning Tunes is excited to bring our Grateful Dead for Kids show with Ed Hough’s Dead Collective to the Gordon Center for Performing Arts on Feb. 16 for a special Sunday morning show.

If you’re a Grateful Dead fan with young kids, you’ve probably wanted to bring them with you to share your love of this incredible band. Now you can — at the Gordon Center — with Ed Hough’s Dead Collective, featuring some of Baltimore’s best roots and Americana musicians.

Check out the band lineup for this show:

As a founding member of Smooth Kentucky, Ed Hough has been an influential part of the Baltimore music scene for decades. He and Cris Jacobs are longtime friends who have performed the music of Smooth Kentucky, The Grateful Dead and many other bands over the years.

A star of Baltimore’s roots and jam scenes, Cris Jacobs rose to prominence as the singer and guitarist from the popular Baltimore band The Bridge before branching out as a solo artist. He has performed with Grateful Dead bassist Phil Lesh & Friends on several occasions, toured with Steve Winwood and recorded with Ivan Neville. Earlier this year, he released “Painted Roads,” his latest solo album.

Dave is also a member of Baltimore roots rock/Americana mainstays The Bridge.

Tim has performed with a long list of D.C.- and Baltimore-based musicians over more than three decades.

Since Saturday Morning Tunes launched in January 2017, more than 7,000 different parents and kids from all across Maryland and beyond have come to one of our concerts for the whole family. These are shows that parents and kids can all enjoy together. We had 1,200 parents and kids at our Phish show alone!

**Family Four Packs are good for any combination of four people.**

This show is sponsored by Race Pace Bicycles, Garrison Forest School, The B&O Railroad Museum and (cool) progeny. Illustrations are by the Baltimore artist and children’s book author Kevin Sherry.