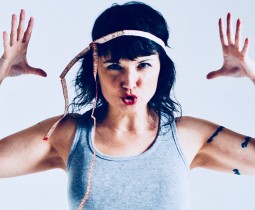 Mary Prankster and her band come to WTMD for an intimate evening of live music on Dec. 19.

Update: This show is now SOLD OUT! Thank you Baltimore, see you Dec. 19!

WTMD is excited to host a rare and intimate evening with Mary Prankster, a cult hero of Baltimore’s music scene on Thursday, December 19th.

In the 1990s, Mary’s lurid lyrics got her banned from playing live in Annapolis. Then, out of the blue, WHFS began championing her music on their morning show, and turned her into an alt-rock anti-hero in the Mid-Atlantic.

WHFS sent Mary on a “Rest Stop Tour” which ended with a 10-mile backup on I-295 after so many cars stopped to see her play on the off-ramp. (Maryland State Police officers threatened to have her arrested if she ever did that again.)

Mary’s 1998 debut album “Blue Skies Over Dundalk” is a cult classic album, and after taking more than 10 years off from writing and performing, she’s back with a brand new record, “Thickly Settled.”

A Very Mary (Prankster) Xmas will feature Mary performing alongside her ace band of Baltimore musicians, including Walker Teret (Lower Dens, Celebration) and Dan Ryan (Super City). She’ll play songs from “Thickly Settled,” including the new single “Local Honey,” live on the radio, and then we’ll go off-air for a set of classic Mary Prankster tunes.

Mary’s Pranksgiving special sold out The Ottobar in Baltimore and The Birchmere in D.C. This is a rare chance to see Mary in WTMD’s acoustically engineered performance studio, a much more intimate setting.

Reserved seating is $27 and general admission (standing) is $22.

Doors open at 7:30 p.m. and the music starts at 8:30 p.m. at 1 Olympic Place in Towson. Sponsored in part by Boordy Vineyards, Cunningham’s and Coney Island Brewing Company.