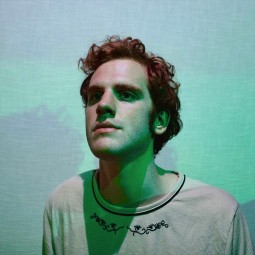 Join us at WTMD on Thursday Dec. 12 for a Live Lunch performance and broadcast with singer, songwriter, “American Idol” finalist and TU student Jeremiah Lloyd Harmon.

Quiet and thoughtful in his personal demeanor, it seems counter-intuitive that Jeremiah’s breakout moment would come on national TV – a medium suffused with bombast and self importance.
After breaking through the Top 10 on “American Idol,” every action seemed to have a massive reaction: Upon singing Elton John’s “We All Fall In Love Sometimes” – a Jeff Buckley favorite – Harmon received a phone call from Sir Elton and a public declaration that the performance, “Took my breath away.”
He caught the attention of actress and Broadway singer Cynthia Erivo and the pair sang the Cyndi Lauper hit “Time After Time” as a duet.
Meanwhile, after daily sound stage rehearsals for “Idol,” Jeremiah worked on the lyric and chord charts for his own songs and jumped into an Uber for the drive out to Long Beach recording studio BIG EGO.
The first three sessions yielded nine songs including “Almost Heaven” featuring a rhythm section of Cherry Glazerr drummer Tabor Allen and L.A. bass virtuoso Steuart Liebig. Eventually the scope of the album would grow to include an orchestra, a 20 person gospel choir, iconoclastic guitarist Jeff Parker and Stephen Hodges, drummer on the Tom Waits classic Swordfishtrombones.
Jeremiah Lloyd Harmon stops by WTMD to play some songs for you, for Live Lunch … Friday – at the WTMD studios, 1 Olympic Place in Towson.
Doors are 11:30, show time is 12 noon, admission is free and seating is limited. Jeremiah will also be playing The Ottobar on Dec. 17.
Live Lunch is made possible by Cunningham’s Café & Bakery, Music Go Round – Cockeysville and the Mt. Washington Tavern.
By Sam Sessa|2019-12-12T15:54:29-05:00November 12th, 2019|Categories: WTMD News|