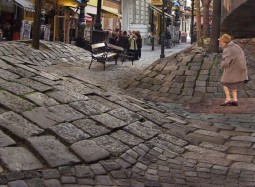 The Shadow artist’s given name was Herbert but he used a stage name. Standing at a height of 6’ 1” his stage name was ironic. He played the ukulele left-handed but the guitar right-handed. He also played mandolin and violin but ukulele was his instrument of choice.

The original artist were the first American band to accumulate eight consecutive gold LPs. They are well known for a memorable performance on The Ed Sullivan Show.

The song is about feeling alienated.