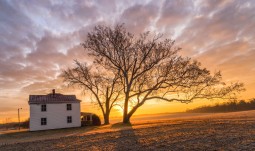 Both artist are shadow artists today as no one can claim rights to the song, meaning it can be recorded and sold royalty-free. It has been recorded by a number of artists including the first known recording by Texas Alexander in the 1920’s, as well as Nina Simone, Bob Dylan, Lead Belly and many more but it wasn’t a hit until it was recorded by an English rhythm and blues, rock band in the 1960’s. In 1964 it went to #1 in both England and the States. It went on to become their signature song. The 1964 version was recorded in one take.

The Shadow of The Shadow was recorded by another English rock band though this is a far heavier version. They are a trio, who once opened for Fall Out Boy at Merriweather Post Pavilion but have gone on to headlining arena tours, Grammy’s and marriages to Hollywood celebrities.

Historians have not been able to definitively identify the inspiration for the song but two popular theories surmise it is either about a brothel or a women’s prison in New Orleans.