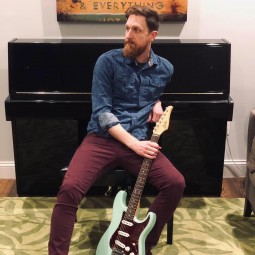 Mark Hopkins and the Pretty War celebrate the release of their new album, “VIII,” at WTMD Nov. 14.

A longtime friend of WTMD, Mark Hopkins grew up learning Beatles tunes but took a wild left turn into the jam band scene during high school and college.

After studying music at Berklee, Mark moved back to Baltimore and found his voice in the world of blues and soul. Hopkins and his band love to improvise, but it all has to start with a good song.

Two years in the making, “VIII” is Hopkins’ 8th studio album, an eight-song tour through the blues, roots music and slide guitar. If you like groove oriented music and guitar solos, this record’s for you.

Doors open at 7:30 p.m. and the music starts at 8:30 p.m. at WTMD’s acoustically engineered performance studio, 1 Olympic Place in Towson.