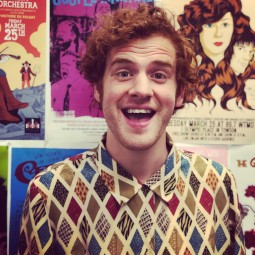 Jeremiah Lloyd Harmon grew up in a very conservative, religious family — his father is a pastor, and Jeremiah was home-schooled through high school. He enrolled in Liberty University, an evangelical college in Virginia, was in their choir and sang and played music often.

But after so many years of hiding the fact that he’s gay, Jeremiah couldn’t be silent about it anymore. As you might imagine, this led to some tension in his family. And a few years later, Jeremiah found himself living in Catonsville, working as a janitor at his father’s church, studying vocal performance at Towson University and playing music when he could.

That’s when, out of the blue, a producer from American Idol contacted Jeremiah and invited him to audition. Jeremiah played an original song that he’d never performed live before, and the judges — especially Katy Perry and Lionel Ritchie — loved it. Jeremiah went all the way to No. 6 on the show before getting cut.

Since then, he’s recorded an album of songs including the one that got him on “American Idol.” He launched a Kickstarter campaign to pay for it, and hit his goal of $25,000 in just a few days.