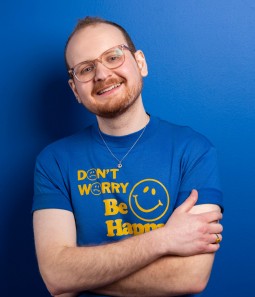 Micah E. Wood is a Baltimore-based singer and photographer who recently released his new self-titled album.

His songs are filled to the brim with emotion, often about love, lust or heartbreak. His new record is his first self-titled album, and also his best yet. He worked with a great team of producers — Mateyo did many of the beats, and Natural Velvet’s Corynne Ostermann also helped produce.

The album release show was in May at the Charmery’s Ice Cream Factory in Union Collective. Micah put together an ace band for it, featuring members of Super City, the Lushpockets and Natural Velvet. A new flavor of Micah E. Wood-themed ice cream was served to a crowd of 200, which packed the place.

Micah’s next show is at The Ottobar Aug. 3 with Dyyo Live!, EYAS, Romantic States and Station North Sadboi.

Check it out below.