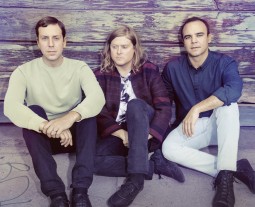 Dan Deacon and William Cashion of Future Islands are the opening acts for Beach House’s June 11 show at the Hippodrome Theatre.

The full lineup was announced Tuesday and will feature Cashion, who plays bass in Future Islands, performing material from his upcoming solo album.

Beach House is WTMD’s first Artist in Residence, a new series of radio specials which offer a glimpse into the world of the artists behind some of our favorite music.

At 8 p.m. on Thursday May 30, Beach House’s Alex Scally and Victoria Legrand will curate and host an hour of songs which have become touchstones in their lives and careers. Then, they’ll sit down for a rare and intimate interview at 9 p.m. Tuesday June 4.

This week, WTMD is giving away several pairs of tickets to the June 11 performance at the Hippodrome Theatre.

Note: An earlier version of this article incorrectly stated Future Islands was among the opening acts, instead of Future Islands’ bassist, William Cashion. WTMD regrets the error.