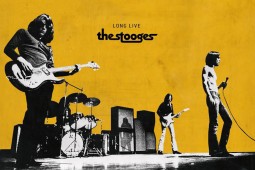 The WTMD Film Series and Towson University’s Department of Electronic Media and Film present a free screening of the Stooges documentary “Gimme Danger” Wednesday Oct. 24 at 1 Olympic Place in Towson.

Rock music was never the same after The Stooges.

Led by Iggy Pop, this raw, proto-punk band put on some of the wildest live shows of the early 1970s and left an indelible mark on rock ‘n’ roll.

And on Wednesday Oct. 24, the WTMD film series, in partnership with the Towson University Dept. of Electronic Media and Film, presents “Gimme Danger,” a new documentary about the Stooges directed by Jim Jarmusch.

Doors open at 7:30 p.m. Free, with popcorn and other refreshments provided.

WTMD’s performance studio is at 1 Olympic Place in Towson.