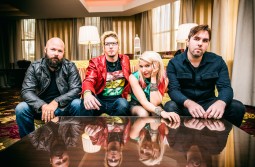 Baltimore rockers The Last Year will release their new album, “Timebombs,” at WTMD on April 6.

The Last Year is no stranger to the stage — they’ve played more than 30 countries on three continents, and mix retro influences with a modern appeal. Their influences range from the hook-heavy hits of The Cars to the spacey, hypnotic sounds of the late ’80s to ’90s acts like The Cure and Portishead.

Guided by singer Niki Barr’s coy, yet powerful melodies and the band’s array of synth growls, driving rhythms and swirling guitar sounds, theirlive  show is a must-see. Barr and bassist/keyboardist Scott Ensign form the core of the group, and drummer BJ Kerwin and guitarist Scott Griffith round out the lineup.

The Last Year teamed up with Shanachie Entertainment to release their debut EP in 2015. The EP’s lead single, “Sugar,” which bridges the gap between The Smiths and the infectious, radio-friendly indie rock hooks of Metric, was spun on radio stations across the U.S., including SiriusXM’s Alt Nation, WTMD, WWDC 101, WLUM, KWSS, and WWWX.  NPR Music included the band in their Austin 100 just before their appearance at SXSW 2015.  The band went on to build a national following, supporting acts like Phantogram, Tove Lo, Nico Vega, Semi Precious Weapons, and Neon Hitch.

“Static Automatic,” the band’s first full-length record, was released in 2016.  The single “Rush” may be their best alternative/pop crossover to date, bridging their synth and indie rock influences, and creating a colorful sound reminiscent of St. Lucia, MS MR, or Chvrches.

Their second full-length, “Timebombs,” features the singles “Right Where You Want Me” and “Annabelle.”  The record brings the guitar to the forefront, blending early ’80s new wave and ’90s alt rock.

Tickets are $15 in advance and $17 at the doors. 18+. Sponsored by Flying Dog Brewery and Boordy Vineyards.