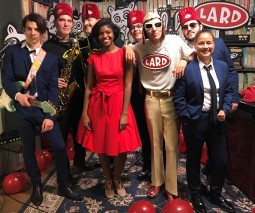 New York rockers Lard Dog and the Band of Shy are one of two headliners at Saturday Morning Tunes at the Senator Theatre Dec. 2, presented by Live Baltimore.

Saturday Morning Tunes is stepping out for our first ever show at Baltimore’s historic Senator Theatre, presented by Live Baltimore!

We’re building a stage inside the classic art deco theater to present two headliners — Lard Dog & the Band of Shy and the Rhodes Tavern Troubadours (and an opener TBA), as well as arts & crafts, inflatable instruments for your little ones to play along with, a photo booth, videos on the big screen, snacks, bicycle rides and other festivities.

It’s a bigger, better version of our traditional Saturday Morning Tunes shows, this time with easier parking (right across the street) and … wait for it … seats!! You and your little ones are still encouraged to dance and run and have fun, of course, but you now have the option of sitting not on the clean, polished WTMD wood floors but in your very own comfy folding movie theater seats.

The usual assortment of delicious snacks (fig bars, fruit strips, milk & juice) will be included in the ticket prices — but now you can also feast on delicious movie theater popcorn (and candy too if you want).

Lard Dog & The Band of Shy burst onto the New York entertainment scene in 2015 with an off-Broadway theatre run called, “Life’s A Real Dream”.  With their quirky lyrics and infectious tunes the band has drawn comparisons to Devo, Rocky Horror Picture Show, Pee Wee Herman, and the B52’s. In 2017, the band landed the #1 chart-topping song on Sirius XM Kids Place Live “13 under 13 Countdown” with the single, “I Like.”

“Surreal comedy in the spirit of children’s stories such as Yo Gabba Gabba, inspired by Zappa, Devo and 1950s beatnik bop” — Philadelphia Inquirer

The Rhodes Tavern Troubadours (The RTTs) played their first show in 2001 and have since been hailed as a “Washington DC Super Group.” They’re dedicated to propagating the DC pop/rock sound that was dominating the Washington area scene in the ’70s, ’80s and ’90s. After playing many, many shows in and around the DC area the boys have honed their sound into the perfect DC-centric DC roots rock band. Their bassist, Mark Noone, is the lead singer of the legendary D.C. band The Slickee Boys, who have played The 9:30 Club 81 times — more than any other band. When they’re not playing late night gigs at bars and clubs, the Rhodes Tavern Troubadours have a second life as a kid-friendly rock band beloved by parents and little ones.

“These guys can whip through a Ray Price tune, a Chuck Berry number, a stompin’soul number or a pure-pop-for-now-people original gem in the same set without grinding any gears”
– The Washington Post