An excerpt of the painting “Pinstripe Blues” by Arin Mitchell.

Curated by Peggy Hoffman, the exhibit opens Nov. 1 and runs through Nov. 30 in the WTMD Studios at 1 Olympic Place in Towson.

Trudy Babchak paints about survival, joy and transformation, using dancers as a recurring theme. The daughter of Holocaust survivors, much of Babchak’s work is influenced by a photograph she saw of children dancing joyfully as they were being sheltered in a convent from the Nazis. She lives in Columbia, where she worked for over ten years as Assistant Director of the Columbia Art Center, and now works part-time as the Gallery Specialist. Babchak holds a degree in Fine Arts from University of Maryland and a post-baccalaureate certificate in Painting from MICA. Her work has been exhibited at venues like Howard Community College, Gallery 1448, and Touchstone Gallery (Washington DC). She is represented by HorseSpirit Arts Gallery. 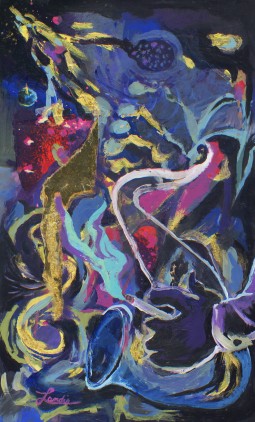 “Ella, Charlie & Dizzy Flyin’ Home” by Landis Expandis will be on display as part of “Rhythm & Muse”

Award-winning musician, DJ, and artist Landis Expandis left MICA after his junior year to pursue a career in music. His rock/soul band, All Mighty Senators made a national name for itself, so he spent several years touring with the group. Over 25 years later, his band still plays from time to time and Expandis has gone back to school to finish a degree in graphic design and illustration. He believes that art, like music, consists of color , texture and composition.

Baltimore-born Arin Mitchell has been a practicing artist for over 20 years. She studied painting at MICA and was introduced to sculpting at Coppin State University. She considers herself a figurative painter. Through the use of color and the flow of lines, she hopes to create a still but moving rhythm in her work that is also found in life. This rhythm can be musical or emotional. Mitchell works extensively on un-stretched canvas, lending a loose and flowing feel to her work.

Minás Konsolas is inspired by the repetition, rhythm and pattern that is part of every action of labor, every form of expression, and much of nature. In his current body of work, his intent is to create a field of energy that engages the viewer in more than one way. He does this by using playful, colorful motifs in a sequential, mathematical order. Konsolas was born in Greece and has lived in Baltimore since 1976, where he graduated from MICA. He is the former owner of Minás Gallery, a cultural gathering spot for 22 years. He now paints full-time from his studio in Charles Village.

Mattye Hamilton is a painter and printmaker living in Baltimore, MD. She received her BFA in painting from The Maryland Institute College of Art in 1994. For her, painting is a spiritual and involuntary process. Recently, there has been a lighter feel to her work, a softer approach with line and palette. She is working with abstraction as a way to explore color and figure in their most basic forms. Hamilton’s work has been exhibited at venues like The Creative Alliance, Columbia Art Center, Jordan Faye Contemporary, and Fleckenstein Gallery. Her works have also been published in several magazines, including Shape, MS, and Baltimore Magazine.

Over the past 14 years, 89.7 WTMD has become part of the fabric of the Baltimore arts and music scene. As Towson University’s listener-supported public radio station, WTMD has introduced the region to innovative and exciting new music from Baltimore and beyond. WTMD presents award-winning live shows such as its BSO Pulse collaboration with the Baltimore Symphony Orchestra and First Thursdays, the city’s largest free outdoor concert series, in Canton Waterfront Park. WTMD has also hosted art exhibitions, movie screenings and pioneering broadcasts with live audiences of all backgrounds and ages from its performance studio in Towson.