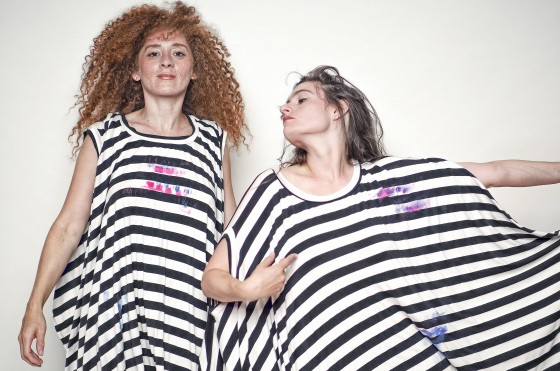 Like many of their Baltimore music peers, Outcalls is fearless. They love to experiment and collaborate, and lift each other up through innovative songwriting and captivating live shows.

And on Friday Sept. 15, WTMD is excited to host the release party for Outcalls’ new album, “No King.”

Led by Melissa Wimbish and Britt Olsen-Ecker — both classically trained singers — Outcalls draws inspiration from political and social events and fills their music with melodic and harmonic surprises. Their songs unfold in chapters, and have a cinematic quality.

Outcalls won the William G. Baker Jr. Merit Award for the Best Overall Performance at WTMD’s 2016 Baltimore Band Block Party. And you may have seen Melissa sing at other WTMD events in the past; she performed as part of our award-winning EMBODY showcase of the human voice last fall, and was the soloist (dressed as Lady Liberty) for the Baltimore Symphony Orchestra’s opening piece at the Lower Dens Pulse show in May.

Baltimore Magazine had this to say about Outcalls’ new single, “No King” — “Combining lush chamber vocals with a robust layering of electronic and acoustic sound, opera singers Melissa Wimbish and Britt Olsen-Ecker create their own brand of baroque indie-pop. Their whimsical pipes wind around an energetic beat that pulses in your ears long after its gone. It has us excited for what’s to come.”

Baltimore’s Super City brings together expert musicianship with an ear for songwriting. Gorgeous instrumental passages weave in and out of thoughtful, well-knit pop songs. This is a band on the brink of something special.

Mixing soul, funk, hip-hop and R&B, J. Pope & the HearNow are one of Baltimore’s best live bands. Their new album, “Soul Searching,” was produced by Wendel Patrick, a professor of hip-hop at the Peabody Conservatory and co-founder of the Baltimore Boom Bap Society.

Tickets are $15 in advance and $17 at the door. WTMD is at 1 Olympic Place in Towson. This show will be broadcast live on air, with a live studio audience from WTMD’s acoustically engineered performance studio. WTMD is listener supported radio from Towson University.