License To Drive is a new weekly segment at WTMD where we examine an album that is celebrating it’s Sweet 16th birthday, and take it for a test drive to see if it passes. Buckle up.

This week, we take a look at and listen to “White Blood Cells”. The White Stripes’ third album, released July 3rd 2001. It may have been their third album chronologically, but this is the one that put them on the map, due in a huge part to their first charting single, the one minute and fifty second long pop-punk song, “Fell in Love With A Girl”, which also came with a well received animated video.

Jack and Meg White, had been married and playing together for five years by this time, but they often told people they were siblings. White Blood Cells brought their story and their furiously-simple-sound to the forefront of the rock-revival movement in the early 2000’s. White Blood Cells fit perfectly into this revival as the album proudly shows off a wide array of influences. At one moment on the album, a song will be cozy and friendly, “We’re Going to Be Friends”, which it’s no wonder Jack Johnson covered it so perfectly. Then two songs later, on “I Think I Smell A Rat,” Jack White is beating out a fuzzy-blues-rock riff with a baseball bat, reminiscent of Jimmy Page. White Blood Cells, more than any of their other albums before, or after, showcases Jack White’s talent in writing songs that sound endlessly classic, and yet somehow fresh and new.

The name “White Blood Cells” comes from a metaphor that Jack White used likening the media and the attention the band has received, to ‘bacteria’ coming at them. Despite the obvious shtick associated with the band; dressing in red, black, and white, the pseudonyms, and the mystery surrounding their relationship, Jack vocally disliked the hype that the media gave the band, and he designed the album cover to reflect this sentiment, with Meg and him surrounded by diseased photographers. As evidence of this perceived paranoia, when the album came out, Rolling Stone gave it three and a half stars out of five, and spent more time in the review commenting on their appearance “they look like they haven’t been out of their apartment in six years”, than on the music. 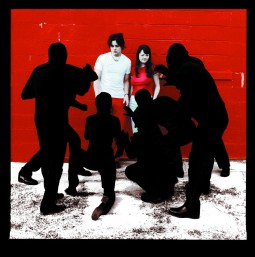 “White Blood Cells” turned enough heads to reach #61 on the Billboard 200 charts.  The White Stripes had officially made the leap from a critically acclaimed rock duo, to a band with unlimited commercial potential.  For their tour in support of “White Blood Cells,” Jack White finally quit his day-job at the upholstery shop, and made The White Stripes his full time job.

From the albums opening salvo of stoic aggression “Dead Leaves On The Dirty Ground”, to its closing duet “This Protector” with Jack and Meg on piano, “White Blood Cells” comes full circle. It stands the test of time as well, perfectly summing up the time period, a lost music landscape with an ever louder bleeping and blooping world around the couple. So Jack and Meg construct a dysfunctional home, and a tome, of naturalistic and heart-felt rock-n-roll.

Today we celebrate the Sweet 16th of “White Blood Cells” and remember it for what it was, a landmark album for a couple of Detroit rockers, that gave them the keys to record three more albums together, though none of them would be as good as this, and to tour the world as one of the biggest artists of the decade.