I’m amazed by how much new music I am hearing as I create Young At Heart. I have to thank the

other DJs at WTMD who have been so helpful, especially with the Adult Kids feature. Sometimes it’s not easy to find a kid-friendly song by an adult artist who has done one song for an album for kids, like this week’s Adult Kid, Rhett Miller of the Old 97’s. Rhett covered “Ziggy Stardust” on a CD for kids called Let All the Children Boogie – A Tribute to David Bowie. I really needed help finding something kid-friendly to play by the Old 97’s. Enter WTMD’s Sam Gallant and Galler. They ran through a list of the band’s songs with me and helped choose “Dance With Me” for Young At Heart. I have some self-imposed guidelines for the music I play on the show: no songs about drinking (unless it’s non-alcoholic), no songs about all-night parties. No sex. No bad language. No violence. 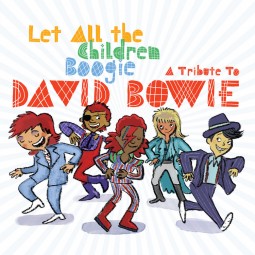 So back to this compilation CD. Rhett’s in good company with a mix of adult artists and kindie musicians. Proceeds benefit the It Get’s Better Project, which provides a platform where young people who are lesbian, gay, bisexual, or transgender can share their stories, take the It Gets Better Project pledge and watch videos of love and support. This is the third benefit CD created by Spare the Rock Records, headed up by Bill Childs. Bill also has a wonderful family show by the same name – check out his podcast.

I was happy to come across Cake doing a version of the Muppet Show and Sesame Street classic “Mahna Mahna.” This ear-worm dates back to the 60’s, but became popular after muppets Bip Bippadotta and his band The Snowths performed it on the Ed Sullivan Show in 1969. Here’s the original Muppet Show version, although the cover by Cake that you’ll hear on this week’s show is pretty cool, too.

You’ll find more information and videos of some of the songs in this week’s playlist by clicking on the links below.

Infinite thanks to Sam Sessa, Young At Heart’s producer. I really couldn’t do this without Sam’s guidance and help putting together a great show for families. Be sure to tune into Sam’s weekly show Baltimore Hit Parade, featuring the best in Baltimore-area artists. Sam also created and curates Saturday Morning Tunes, the wonderful live music series for families right here at WTMD.

I’d love to hear from you, so please write me at [email protected].

Are You Sleeping – Nilsson
Hello – Andy Bopp
Gentle Breeze – Lou Reed and Laurie Anderson
Salta Salta – Uno Dos Tres Andres
The Waves – The Pointed Man Band
Marsupial – Danny Weinkauf
We Like the Zoo (‘Cause We’re Animals, Too) – Walter Martin
Animals In Concert – Joanie Leeds
Mahna Mahna – Cake
Do Do Do Do Da Da Da Da – The Police
The Tra La La Song – Liz Phair and Material Issue
Ziggy Stardust – Rhett Miller
Dance With Me – The Old 97’s
Are We There Yet – Colin Hay
Explorer Of the World – Frances England
Roam – The B52’s
A Fact Is a Gift You Give Your Brain – STEVEN STEVEN
Young At Heart – Mista Cookie Jar