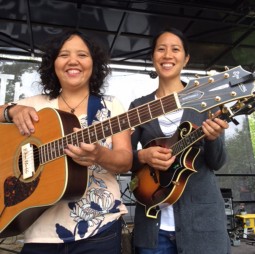 The first three Saturday Morning Tunes concerts all sold out weeks in advance, so we’re excited to keep the series going into April with a concert by Little Miss Ann!

A first-generation Filipina-American, Little Miss Ann has enjoyed national acclaim and a fervent following for her upbeat, down-to-earth and interactive folksy music. Her fifth album of hopeful and happy songs, “Keep On,” (set for release on Feb. 17) is the result of a collaboration with children’s music newcomer Amy D.

Based in Chicago, Little Miss Ann has been featured in the Chicago Tribune, Time Out New York and on WXRT, and contributed a song to “Keep Hope Machine Running: Songs of Woodie Guthrie” (benefitting the Woodie Guthrie Archives). Amy D, who worked with Little Miss Ann for “Keep On,” is a licensed clinical social worker who specializes in musical therapy. Little Miss Ann has performed at a variety of venues, from Lollapalooza to the Detroit Zoo, and we’re looking forward to having her and Amy D at WTMD.

The shows are once a month on Saturday mornings through April, broadcast live on the radio with a live studio audience of little ones! (That’s where you come in.)

Doors open at 9 a.m. and the music runs from 9:30 a.m.-11 a.m. Each performance has an opening act as well as a headliner. The Walters Art Museum brings free arts and crafts for the kids, Eddie’s of Roland Park provides snacks (organic fig bars and fruit strips) as well as drinks (Horizon milk and Honest juice) which are included in the ticket price for all kids. Race Pace Bicycles also sets up bicycles with training wheels for children to ride around the enclosed plaza outside our studio. Other sponsors include (cool) progeny and Garrison Forest School.

The WTMD performance studio is a safe, clean environment with comfy furniture that’s ideal for climbing and sitting. Both our men’s and women’s bathrooms have stainless steel changing tables, and there will also be vintage cartoons playing on our flat screen TVs.

Also — kids under 2 are free! However, please reserve a free spot for your kid(s) under 2 so we know how many little ones to expect.