Inside ‘Everything On It,’ WTMD’s first installation art exhibit 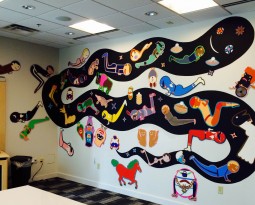 “The Worm” by Andrew Liang is part of “Everything On It,” WTMD’s first installation art exhibit.

Listen: ‘Everything On It’

Power rangers, teenage mutant ninja turtles and other whimsical figures dance along a giant black swirl painted on the wall inside WTMD’s conference room. In the lobby, the windows are dotted with dozens of black vinyl cutouts in different shapes and sizes.

It’s all part of “Everything On It,” an exhibit created for WTMD by Baltimore artists Andrew Liang and Zoe Friedman.

WTMD partnered with the award-winning online publication Bmoreart to present “Everything On It.” It opens with a free reception at 7 p.m. Friday March 28, with beer from Union Craft Brewing, wine from Grand Cru and finger food from Fresh Market in Towson. Americana duo Mountain Peaks will perform, along with the avant garde ensemble Ghost Life.

This is the first time Liang and Friedman have worked together. Friedman focuses on videos and installations, and her art is often melancholy. In this show, her pieces are all black and white, while Liang’s burst with color. He loves humor, and has a whimsical eye. That’s what drew Friedman to the project, she says.

“I liked Andrew’s work because it was really different from mine,” she said. “But the humor aspect is great, and something that my work is really lacking

A native of New York City, Friedman went to graduate school at MICA. Music has been an important part of her creative process for some time.

“I always listen to music, and I have intense visions while listening to music sometimes,” Friedman says. “So I really enjoy collaborating with musicians, thinking of the visuals of what I’m doing as complimenting the sound.”

Friedman collaborated with the Baltimore band Peals to create a stop-motion animated film, which which will be one of three videos shown as part of “Everything On It.” She also hand cut a series of five sheets of Tyvek, three feet wide by five feet long, which hang in the conference room. A few feet away is Liang’s black swirl, covered with cartoon-style cutouts. It’s called The Worm, named after the break-dancing move which Liang first saw in a video.

“I was thinking to myself, ‘What if there’s a giant worm, and all the people inside the worm are doing ‘The Worm,'” Liang says. “I laughed a little bit and then I started making some drawings and [thought] ‘That’s quite interesting, because a lot of things could happen in a giant worm.'”

Born in Taiwan, Liang moved with his family to Texas when he was 13. Much of the inspiration for his art comes from his youth — books he read, and games he played in elementary school. He graduated from MICA in 2002 and works at the college preparing exhibits. He also co-runs Current Space, a gallery and performance venue.

“Everything On It” will be the first time Liang’s parents have seen one of his exhibits. Through WTMD, he hopes to introduce his work to a new audience of art lovers.

“The work will be visible to many different people,” Liang says. “That part really attracts me. I really like it. I’ve never done anything like this before.”

Why name the exhibit “Everything On It?” Is it because the exhibit combines, music, video, installations and murals? No, that’s just how Liang and Friedman like their sandwiches — with ‘everything on it.’