In Baltimore, Beach House Gene Clark tribute is a show like ‘No Other’

In the past several years, much has been said and written about Baltimore’s music scene. Too much, perhaps. But it has produced wonderful moments, when you feel a part of something larger — moments which could have only happened here. 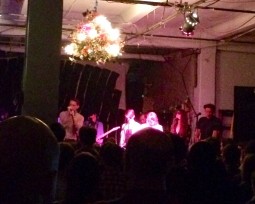 Beach House and an all-star lineup re-created Gene Clark’s forgotten 1974 album “No Other” at Floristree.

Last night’s Gene Clark: No Other show at Floristree felt that way. Beach House, the city’s most popular band, brought together a who’s-who of indie rock to pay tribute to “No Other,” a largely forgotten album by the late Clark, a founding member of the Byrds.

Robin Pecknold of Fleet Foxes, Hamilton Leithauser of the Walkmen, Daniel Rossen of Grizzly Bear and Iain Matthews of Fairport Convention traded lead vocals. The backup singers, who were smartly set up at the front of the stage, included Beach House’s Victoria Legrand and Jenn Wasner of Wye Oak.

Despite the lineup’s star power, there were no egos. The musicians let the songs take the spotlight, and gave the music a new perspective. The album, originally released in 1974 and ignored by critics and the record industry, is often bogged down with unnecessary production (does any song really need a violin run through a wah-wah pedal?). Strip away the extra layers, as the band did last night, and you’re left with remarkable songwriting and lyrics. On the record, Clark’s voice is often desperate, almost broken, but still earnest.

Last night’s show was one of four, each in a different city. In Philadelphia, New York and D.C., the band booked gigs in large, legitimate clubs. But here, in keeping with Baltimore’s DIY ethics, they played Floristree, an underground space on the West Side which holds only a couple hundred people. It was by far the best-sounding performance I’ve ever seen at Floristree, thanks to a good PA and an even better sound guy.

Pecknold is no stranger to harmonies, and when he was joined by the background singers on “Strength of Strings,” it was almost overwhelming. The epic “Some Misunderstanding,” featuring some blistering guitar work and Rossen on vocals, was perhaps the show’s highpoint.

“I’m the only one here who was alive in 1974,” said Iain Matthews (he’s 67 but you’d never know it), before leading the band through a steadfast rendition of “The True One.” The set ended with a particularly funky “Lady of the North,” sung by Leithauser.

The three-song encore began with Leithauser singing the Byrds’ “I’ll Feel A Whole Lot Better.” Legrand took the mic for “Hear the Wind,” a poignant tune made even more so by her ashy voice. All the musicians crowded the stage for a celebratory version of the Byrds’ hit “Eight Miles High.”

Last year, Beach House was criticized for not playing Baltimore more often, and offering the kind of special shows other bands give their hometowns. Last night’s show more than made up for it. Walking out of Floristree, you couldn’t help but smile and wonder, ‘Did that really just happen?’ Only in Baltimore.