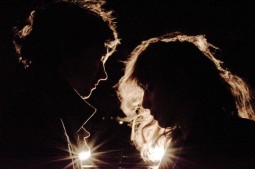 Yesterday, Beach House announced a short run of tribute shows performing Gene Clark’s album “No Other” with a star-studded cast of musicians which stops at Floristree on Jan. 23.

But it’s more than just a cool idea for a concert. This is a change in direction for the duo of Alex Scally and Victoria Legrand, which comes after they were criticized by Baltimore writers for not showing enough love for their hometown.

Beach House is, without any doubt, Baltimore’s most popular band. And in the past few years, Alex and Victoria have become increasingly particular about the venues they play. That’s part of the reason why they didn’t perform in Baltimore for three long years before their show at the Modell Performing Arts Center at the Lyric  this past April.

Before that show, they got into a brief Twitter spat with the local blogger Baltimore Chop, who accused them of being “posers” (warning: there’s some profanity in that link). And in his review of the Lyric show, City Paper’s Brandon Weigel wrote:

“There are few, if any, social contracts a band should be beholden to, but playing at least occasional shows for local fans, many of them people who watched the group grow over time and have supported their work for years before they became successful, should be one of them.”

With this run of four Gene Clark tribute shows, including dates in Washington, Philadelphia and Brooklyn, Beach House hopes to grow appreciation for “No Other,” an overlooked gem. They’ve brought together an impressive cast to handle Clark’s vocals: Hamilton Leithauser of The Walkmen, Robin Pecknold of Fleet Foxes, Daniel Rossen of Grizzly Bear and Iain Matthews of Plainsong/Fairport Convention. For tickets, go here.

In the past three years, as Beach House has grown more and more popular, many Baltimore music fans — myself included — have wished Alex and Victoria would do something special in their hometown, other than just a Beach House concert. And I wonder if the criticism played any role in Beach House’s decision to do this show. Either way, this show has already become one of the most anticipated Baltimore concerts of 2014.