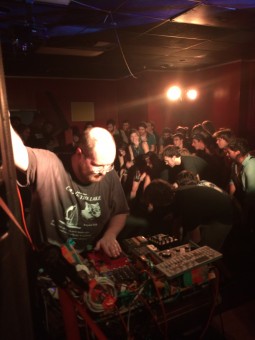 If he wanted, he could sell out a club the size of Rams Head Live. But when he’s in town, you’ll usually see Deacon playing much smaller places like The Ottobar, or, as was the case last Thursday, a small bar and lounge in Station North.

With its plush couches, small stage and two bars, The Crown is about as intimate as a venue gets. It only holds about 100 people, and, as you might imagine, tickets for Deacon’s show there went fast. (Tickets were another issue altogether, see here.)

Deacon booked the show to test new material from the album he’s currently recording. Due to an equipment malfunction, Deacon had to move his gear to the floor, where he always used to perform. He was annoyed, but didn’t let it affect the show. Seeing him at eye level in such a small club made it feel like 2005 all over again.

Given the distortion and effects on his voice, it’s almost impossible to make out what Deacon is saying live. But the new songs had harsher, more metallic percussion. A couple of the pieces had more laid back — even borderline funky — grooves. I’m curious to hear the final products, because based on what I heard, this could be Deacon’s most danceable album yet.

Deacon worked the crowd, getting everyone to kneel and stretch out their hands to the center of the room, then slowly rise. Later, he split the room in half and organized an improvisational dance competition (I’m not sure who won).

One of the hallmarks of a Deacon solo show is the awkward hipster moshing, which happens near the stage. Only at Dan Deacon concerts will someone get shoved into you, pick themselves up, and say “I’m sorry!”

At the end, Deacon had everyone pull out their smartphones, load the Wham City Lights app and hold their phones over their heads. The app listened to the song and made the phones glow different colors. I’m glad the app is catching on. It’s one of the coolest things to come out of Wham City.

It’s worth noting that at least two people in the audience (one male, one female) shouted things at Deacon during the show. Deacon brought the woman up on the stage and had her say what she wanted to say, which seemed to quiet her down. The guy, who looked like he’d had one too many, kept interfering, but Deacon let him down easy. I think both of them were Deacon’s friends or acquaintances, which had to be frustrating. But he rolled with it.

Deacon’s set began just after midnight and lasted about 50 minutes. That might sound short, but it felt right, and I think everyone went home satisfied. It was a lot of fun to see him in such a small room, playing new material. Deacon loves his hometown, and his willingness to put on shows like this (despite the equipment malfunctions and hecklers) remind us how lucky we are to have him here.