Dan Deacon tickets at the Crown expired after 10 p.m. 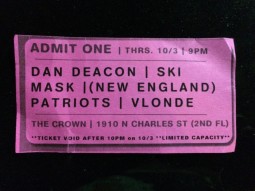 A ticket for Dan Deacon’s show last night at the Crown.

Tickets to Dan Deacon’s show last night at the Crown in Station North came with an unusual policy: they were void after 10 p.m., which meant you had to arrive early and sit through all three openers to see Deacon. I’ve seen a lot of shows over the years, but this is the first time I’ve heard of anything like this.

At first, I was annoyed — and I’m sure I wasn’t alone. I came for Deacon, who had promised a set of all new material, and aside from Vlonde, I had no interest in seeing the other two openers (New England Patriots and Ski Mask).

But the more I thought about it, the more it made sense. This was a showcase of new, unreleased material from one of Baltimore’s most popular musicians, held at an intimate club. There were only 100 tickets, according to the club’s management, and if you wanted one, you had to come buy it in person at the door before the show.

Deacon easily sells out much larger clubs, and gigs like these don’t come around often. So if Deacon (or the club) wanted to make sure everyone was there by 10 p.m., so be it.

I didn’t stand outside and see if they were actually enforcing the 10 p.m. policy, but judging by the size of the crowd, I’d say 90 percent of the people were there by 10 p.m.

With three openers, I was a little worried Deacon wouldn’t go on until 1 a.m. That would have been rough. But the other bands kept their sets tight, and Deacon went on a little after midnight for a fun set which lasted about 45 minutes. I’ll post more about the set later today.