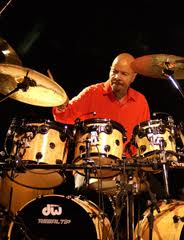 There’s a drummer for prog-rock Gods Genesis who is NOT Phil Collins.

Though he might not officially be a member of Rock and Roll Hall of Fame trio, Chester Thompson is definitley part of their extended family tree. And Baltimore’s as well!

I mean, you gotta love a Charm City native who also played with Frank Zappa!

Listen to this week’s Total Recall below.