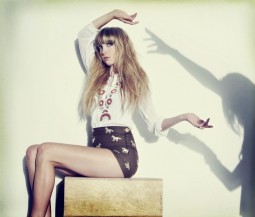 It’s huge news for Burhenn, a longtime D.C. musician who performed as a solo artist and one half of Georgie James before moving to Omaha, Neb. and founding the Mynabirds.

Burhenn joins the touring lineup of Ben Gibbard, Jimmy Tamborello and Jenny Lewis. She met Lewis and Gibbard while touring with Bright Eyes.

“They’re amazing musicians with hearts of gold,” Burhenn said. “Getting to tour with people you admire as musicians and love as people is kind of the best thing in the world. And the fact that this it’s such a beloved band doing such a long-anticipated reunion? I feel like I was chosen to be a part of a really s

Burhenn has been a friend of WTMD for years, and was a guest on Baltimore Unsigned as a solo artist and also with Georgie James. Here’s a clip of her performing an unreleased song, “Not Your Fault,” live at WTMD.

To mark the Postal Service’s 10th anniversary, the band is releasing a deluxe edition of its groundbreaking album “Give Up,” due out April 9.