Sunny Side Up: Justin Townes Earle 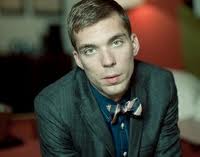 Geek chic Justin even looks the part of urban beat poet! His sporting of thick glasses, bow-ties, thrift store and designer threads earned him a spot on GQ’s Top 25 Most Stylish Men in the World in 2010.

Earle’s fifth album in a short time,  Nothing’s Gonna Change the Way You Feel About Me Now, finds plenty of broken characters in need of redemption.