Sunny Side Up: Trixie Whitley 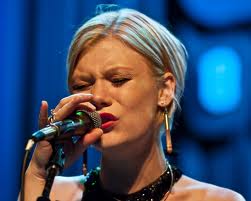 Things have come full circle for Trixie Whitley, the Belgian-American with the emotionally searing voice  and stand out  in Daniel Lanois’ project Black Dub. It was the super-producer (U2, Peter Gabriel, Bob Dylan) who lobbied Columbia Records to sign her father Chris Whitley back in 1990 (which lead to the release of his sparse roots-rock classic Living With the Law).

Now eager to take what she learned from Lanois, embrace the undeniable musical influence of her late dad and unleash her unique artistry, Trixie Whitley debuts her first full-length album Fourth Corner on January 29th.

We were lucky enough to get a stunning preview last Saturday (12/08/12) on Sunny Side Up.