Sunny Side Up: The Wallflowers 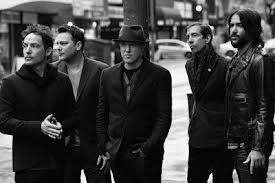 Jakob Dylan took some time off from the band he’s fronted for 23 years to make a couple of acclaimed, sparser-sounding solo albums (including the terrific Women and Country w. Neko Case)

Despite’s Dylan’s solo adventure and keyboardist Rami Jaffe stint as a touring member of the Foo Fighters, the pull to be in a band proved strong, and so those two, along with fellow original Wallflower Greg Richling, joined guitarist Stuart Mathis and Rock and Roll Hall of Fame drummer and newest member Jack Irons (Red Hot Chili Peppers, Pearl Jam) to make Glad All Over.

The first Wallflowers record in 7 years doesn’t have a slow number on it. It’s  quality, up to mid-tempo rock and roll, and chocked full of smart, yet abstract songwriting and adventurous instrumentation, notably the band’s flirtation with hip-hop on “Reboot the Mission.” That song gets Clash/Sandinista!-era cred with Mick Jones adding to Irons and Richling’s shuffle beat.

The Wallflowers joined us for Sunny Side Up on 10/20 to discuss the record and sample some tracks.