Golden Gods on the Silver Screen 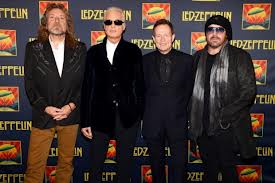 Five years ago 20 million Led Zeppelin fans were all looking at their bank accounts, seeing how they could justify a trip to London in order to see the beloved quartet one last time. Many were not able to come by tickets and only 18,ooo fans were able to attend. However the rest still had the opportunity last night to see the band’s now legendary set at the O2 Arena along the Thames but only had to travel as far as their local movie theater.

The Landmark in Harbor East was the only screen showing the concert here in Baltimore, where a line full of people wearing Zeppelin shirts gathered with drinks and popcorn in hand. The lights dimmed and the audience began to cheer and clap much like any other concert. Robert Plant, Jimmy Page, John Paul Jones and Jason Bonham took the stage, strapped up and exploded directly into “Good Times, Bad Times” setting the tone for the evening.

Several times through the show, Robert Plant acknowledged the reason for this gathering which was to pay tribute to Ahmet Ertegun who steered Atlantic Records to greatness signing acts like Ray Charles, CSNY, and of course Led Zeppelin. And what a tribute it was. The band jammed on favorites such as “No Quarter”, “Kasmir”, “Stairway to Heaven” and “Dazed and Confused” complete with a bowed guitar solo from Page.

The audience cheered and screamed after every song and could be heard singing along with plenty of air drummers and guitarists taboot. Watching Zeppelin via 14 different camera angles was an incredible experience that local musician/tailor Chris Schafer, who actually attended the concert in 2007, said brought back the chills he felt that night.

One of the many highlights of the film was watching Jason Bonham fill in for his dad. Swinging high and hard much like his father did when he was keeping time for the Zeppelin. He was all business but there were moments where the band would gather in a tight formation in front of his massive kit. Looking on to him with big smiles and grins which he would return frequently. Imagine those men being your uncles!

After the second encore with “Rock and Roll”, the theater erupted in cheers and hung around wiping tears from their eyes as the credits rolled. Is it a shame that Led Zeppelin won’t be touring or playing any other shows? Yes of course, but after a swan song like that, what more could you ask for?