PRIMUS in 3D at the Fillmore

The Monday night Primus in 3D show at The Fillmore in Silver Spring was just the third stop on the band’s latest nationwide tour. Primus has been making music on and off for nearly 30 years. The San Fransisco rockers 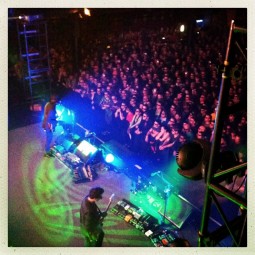 put out their latest full length record “Green Naugahyde” in 2011. Their latest tour in support of their seventh studio album is a full psychedelic 3D experience.  The night began promptly at 8 o’clock, with no opening act, just a quick kick start into old classic tunes and new favorites off of the new album. Everyone at the sold out show was handed a pair of 3D glasses as they entered. The large screen behind the band showed wild images with 3D aspects that hypnotized the audience along with the key-less, bass heavy rhythms that Primus has become known for over the decades. Fans chanted “Primus Sucks” between songs, a strange longstanding tradition.  Some in the audience where dressed up, not because of Haloween, but just because. Pigs, chickens and penguins pogo’d and slam danced as Les Claypool slapped the bass and Jay Lane, of RatDog fame, pounded the skins, and Ler LaLond provided his usual screeching and squealing guitar accompaniment. The 3D was fun and was accented well by the other lighting elements and the sound was superb. One of my favorite parts though, was the short Popeye cartoons in 3D that played during their brief intermission between the two 90 minute sets.  In all, it was a very cool and unique concert going experience and The Fillmore was the perfect venue for Primus in 3D.  Find out more about Primus and the tour on their website.