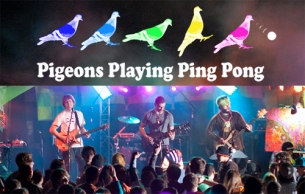 This week’s guests on Baltimore Unsigned were Pigeons Playing Ping Pong. Pigeons Playing Ping Pong are quickly emerging at one of the top jam/ funk bands in Baltimore. A few years ago they released their debut album “Funk EP”, and are currently working on recording a follow-up release. They play a lot of shows in Baltimore and spent most of the summer and now fall on the road, playing gigs all across the U.S. including a handful of music festivals. They hope to release this new record before the end of the year and keep touring in support of it’s release. In case you missed their performance and interview the three segments are available to stream below.